The Other “C” Word 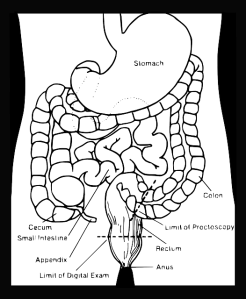 Everybody worries about getting cancer – don’t you? Some folks are convinced it’s a matter of when, not if. They wonder – what kind will I get? Will I recover? If it’s fatal, how much time will I have? And some people do have reason to worry – the woman whose mother and grandmother died of breast cancer; or the man with a family history of colon cancer, who undergoes a colonoscopy every two years.

April is Colon Cancer Awareness Month in my part of the country. This type of cancer is on the rise and, if caught early, is treatable. As such, the colonoscopy is rapidly becoming a routine screening for people over 50 – more so, if there are reasons for concern.

My aunt recently passed away from colon cancer. A few days later, at my annual checkup, my doctor recommended that I undergo a colonoscopy. For me, this was suddenly the other “c” word.

Fear of the Unknown

It’s human nature to fear what we do not know or understand. I did some research and talked to friends and family members who have had the procedure. Some of their stories were comforting, some increased my fears.

For most of my life, I have lived with a chronic undercurrent of anxiety that was my ‘normal’. My mind would often get infested with ANTs (automatic negative thoughts) when facing both familiar fears and the unknown. I have experienced a measure of healing and freedom in this area, but with health issues, worry is my first go to response.

Once my appointment was made, and I received the information and instructions, my fear and worry began to take on a specific shape. First, there was the preparation I needed to undergo the day before:

As to the colonoscopy itself, I felt unease and a sense of dread about the procedure:

And after the procedure:

I have many loving people in my life and more than a dozen committed to praying for me – before, during and after. So that helped me psych myself up for the whole ordeal.

On Saturday evening, I ate my last meal of real food. Then, I mixed the Colyte (cleansing preparation – 4 litres of it). I was pleased to see that it was clear and not the chalky gloppy goo a friend of mine recalled consuming.

On Sunday, I had to maintain a liquid fast (clear liquids). The prospect of 24 hours subsisting on apple juice, clear broth, ginger ale, herbal tea and water was less than thrilling, but the possible discomfort from the rest of the preparations offset that minor annoyance.

As instructed, I took 2 laxative pills (Dulcolax) at 9:00 AM on Sunday. I spent a pleasant morning until shortly after  1:30 PM, when the desired effect began. Then, at 4 PM, I was to start drinking the Colyte – an 8 oz glass every 10-15 minutes, til it was finished. I was surprised at how un-disgusting it was. It had a delicate slightly sweet-slightly salty flavor – it was like drinking fizz-free mineral water.  The last few glasses were hard to get down, but I managed.

The rest of the evening, I ate broth, drank apple juice and ginger ale and water – my last glass was at 10:30 pm, just before I went to bed. The prayers were working because I slept soundly!

Waking up on a weekday, knowing I couldn’t enjoy a big mug of rich dark roast coffee, was hard. Plus, I felt light-headed and a bit weak from the various preparations and the liquid diet.

While getting ready in the bathroom, I , um, had a few moments of concern – for reasons I won’t share – and I prayed in earnest “please God, let me be able to have the procedure!?!” It would have been unbearable to go through all this and then be denied due to an, um, less than optimal condition of my posterior region.

My sweet friend Ann picked me up and we drove downtown. It took an hour, mainly due to construction plus rush hour traffic. The admittance procedure was a breeze and the Endoscopy unit was a nicely appointed and reasonably inviting place. No hint of the horrors lurking behind the sliding doors. Six or seven people sat waiting for the loved ones they would drive home. Ann and I sat giggling over magazines while I waited my turn.

When I was taken in, a friendly nurse took my vitals, asked some questions then, using a colourful diagram, explained the procedure and what I could expect. I was then settled comfortably in a bed to wait for the IV set up.

There were 9 beds in the ward, 5 were occupied. The woman in the bed next to me began to whimper, crying “ohh, ow ow, it huuuurts”. So the nurse comforted her, told her to just release her gas, to try massaging her tummy, that it would be OK. But the woman kept crying and bemoaning her pain, so they went to fetch a doctor, just as my nurse wheeled me away and into the procedure room.

The nurse was surprised that I had not been fitted with my IV yet, so she did that. Then the doctor came in, introduced himself, told me a few things about what to expect and had me sign a waiver. At that point, the nurse injected the sedative into my IV, I settled comfortably on my left side, and the procedure began.

I felt nothing until about midway through, when I felt pressure and cramping – in the part of the bowel that sits across my lower abdomen – after that, for the rest of the procedure, I felt nothing. When it was over – 30 minutes quickly flew by – the doctor told me he had cut out a small polyp, which h would send for testing. The results would be sent to my family doctor but, he said, everything looked fine.

I was then wheeled into the recovery ward, dozed for a half hour or so, and was escorted into the waiting room, where I was met and hugged by my smiling friend Ann. I changed into my clothes and we left. I bought myself a coffee in the lobby (soooo good!) and we drove home.

Cheerful emails filled with gratitude went to friends and family. I phoned my parents to share the blow by blow, then a couple of friends. I ate some soup, later some quiche, and later a treat (vanilla ice cream). I watched TV, then went to bed at 9:00 PM.

Now, when people talk about colonoscopies, I can honestly say – oh, it’s not so bad…  really… it’s a breeze!

Progress not perfection - that's my goal. Live and learn - that's my motto. I like to share bits of wisdom and glimmers of insight gleaned on my life journey of 50+ years. My hope is to encourage, perhaps inspire, fellow journeyers. Each of us has something to share. Let's be generous, gracious and compassionate with one another. I am blessed to be a blessing... so are you!
View all posts by verawrites →
This entry was posted in Health - Food & Fitness, Living by faith, Women Over 40 and tagged cancer prevention, colon, colonoscopy. Bookmark the permalink.

6 Responses to The Other “C” Word

Let me know what you think about this... Cancel reply